Skydive is an open source real-time network topology and protocols analyzer. It aims to provide a comprehensive way of understanding what is happening in the network infrastructure.

Skydive agents collect topology informations and flows and forward them to a central agent for further analysis. All the informations are stored in an Elasticsearch database.

Skydive is SDN-agnostic but provides SDN drivers in order to enhance the topology and flows informations.

Topology probes are used to construct the graph comprising:

Probes which extract topological information from the host about host residing entities are agent probes:

Probes which extract topological information from a remote global entity are analyzer probes: 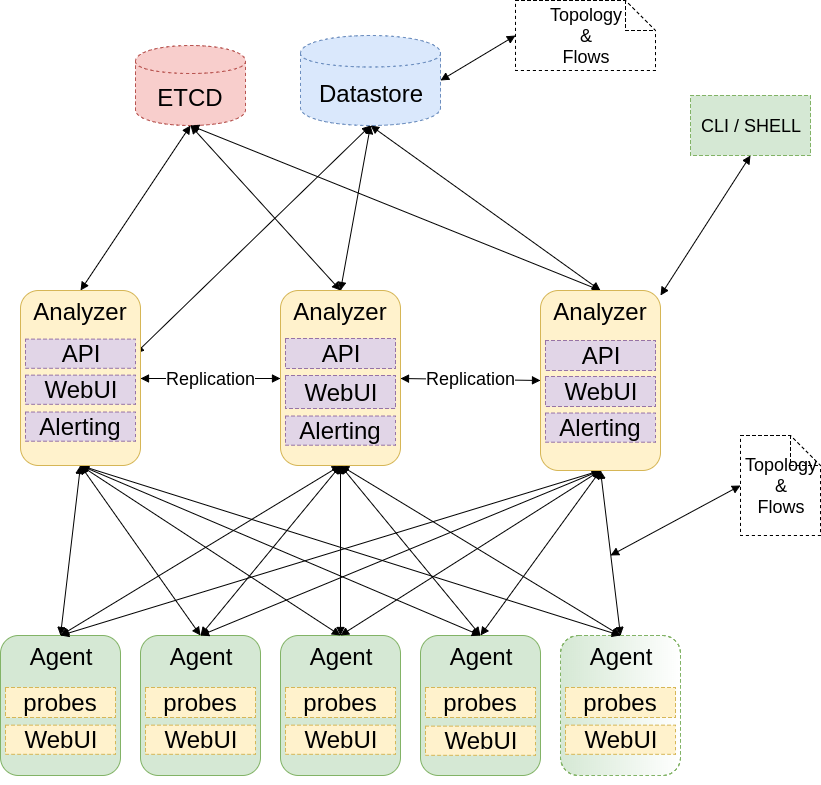 Skydive relies on a event based graph engine, which means that notifications are sent for each modification. Graphs expose notifications over WebSocket connections. Skydive support multiple graph backends for the Graph. The memory backend will be always used by agents while the backend for analyzers can be choosen. Each modification is kept in the datastore so that we have a full history of the graph. This is really useful to troubleshoot even if interfaces do not exist anymore.

Skydive keep a track of packets captured in flow tables. It allows Skydive to keep metrics for each flows. At a given frequency or when the flow expires (see the config file) flows are forwarded from agents to analyzers and then to the datastore.

Each time a new flow is received by the analyzer the flow is enhanced with topology informations like where it has been captured, where it originates from, where the packet is going to.

Skydive uses Gremlin language as its graph traversal language. The Skydive Gremlin implementation allows to use Gremlin for flow traversal purpose. The Gremlin engine can either retrieve informations from the datastore or from agents depending whether the request is about something is the past or for live monitoring/troubleshooting.

Skydive uses Etcd to store API objects like captures. Agents are watching Etcd so that they can react on API calls.

This component watches Etcd and the graph in order to start captures. So when a new capture is created by the API on-demande probe looks for graph nodes matching the Gremlin expression, and if so, start capturing traffic.