One key feature of `Skydive` is the ability to keep track of all the modifications of the topology. This is true for the Flow meaning packet capture as well. In this tutorial we will see how to leverage this with `Grafana` in order to graph metrics such as `sFlow`, `OpenvSwitch`, RTT metrics.

In order to have the Skydive history working we need to setup a storage backend. To do so please check the History and Datastore section.

For the purpose of this example we will use a sandbox script that we provide in the Skydive repository.

This script requires to have OpenvSwitch up and running. It will create 2 network namespaces connected through a OpenvSwitch bridge.

To remove/delete the sandbox it will be :

Taking a look at the Skydive WebUI we get the following topology. 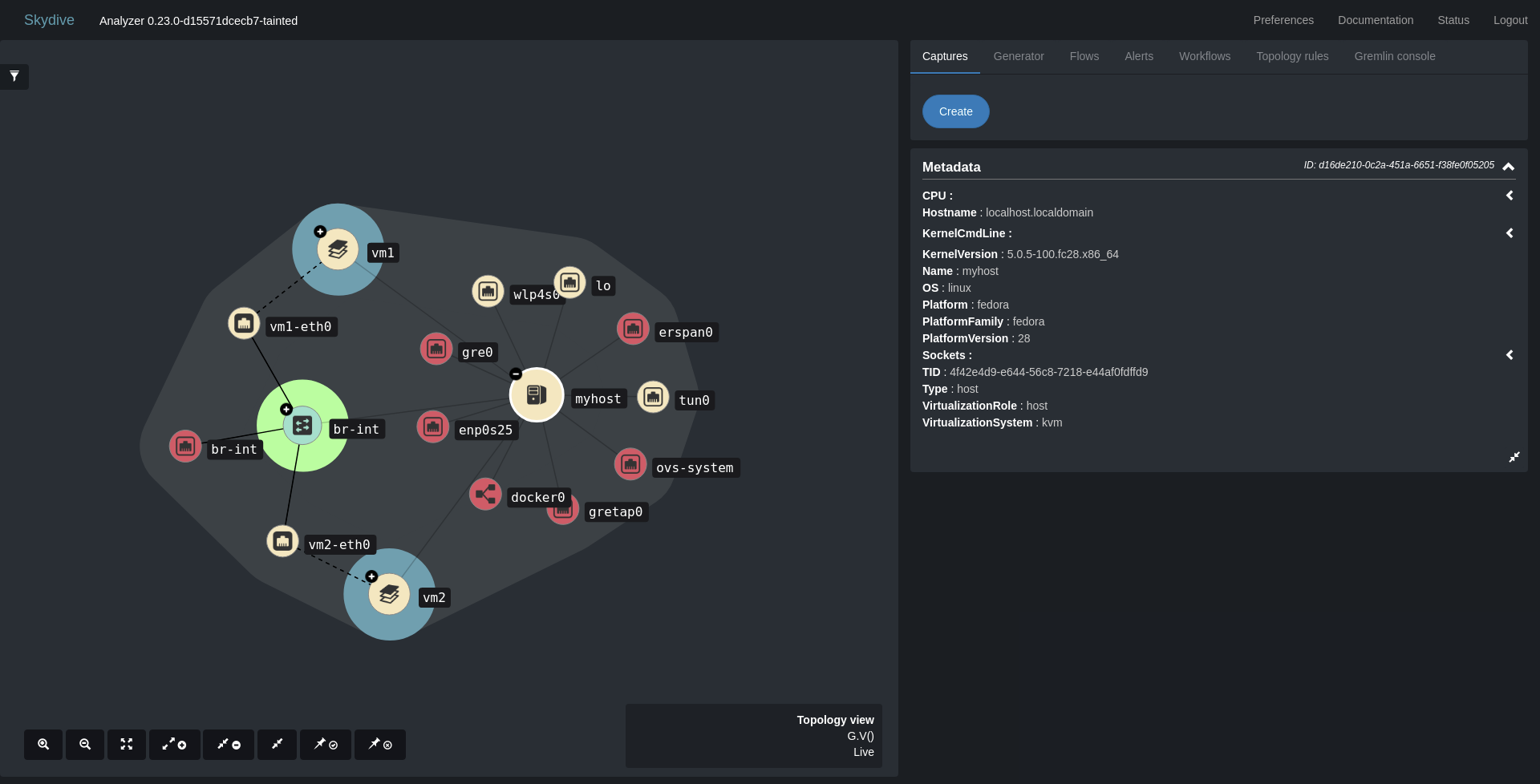 We do provide a Grafana Docker image with the Skydive datasource enabled by default. Starting Grafana with Skydive is fairly simple.

The default user/password is admin/admin.

We use the host networking so that Grafana will have access to our local Skydive.

The Skydive datasource has to be add as the other Grafana datasources. The configuration will be really simple, we just need to enter the Skydive Analyzer endpoint (http://localhost:8082, by default). 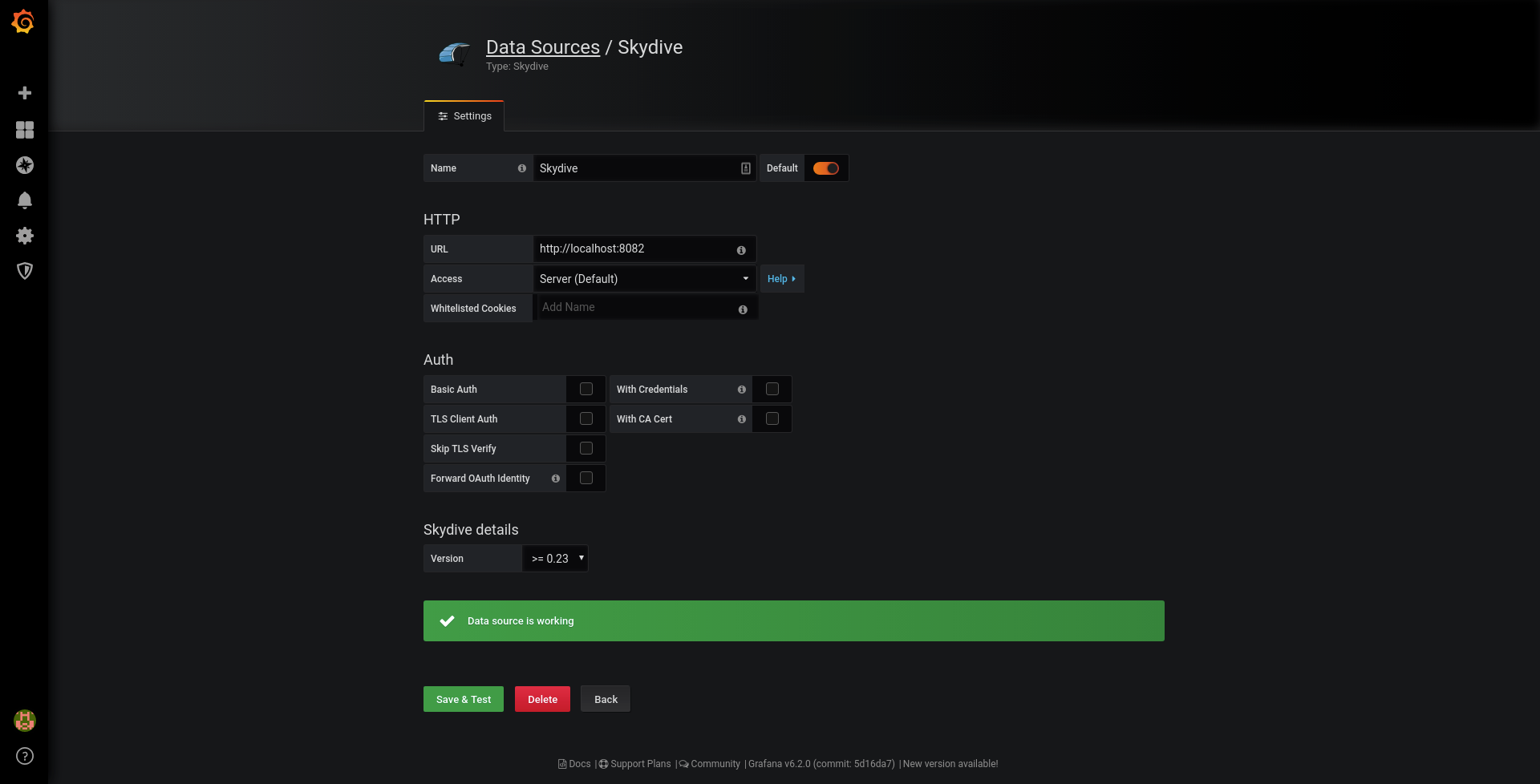 In order to have something to graph in Grafana we need to generate some traffic. We could make a simple ping from one namespace to the other :

But We would rather use the packet injector.

Now we have traffic we can go to Grafana to get it graph. The Skydive datasource is using the same language used for its API. It means that you can select the metrics using the Gremlin query language.

In order to graph our packets we will select on veth pair belonging the a namespace. 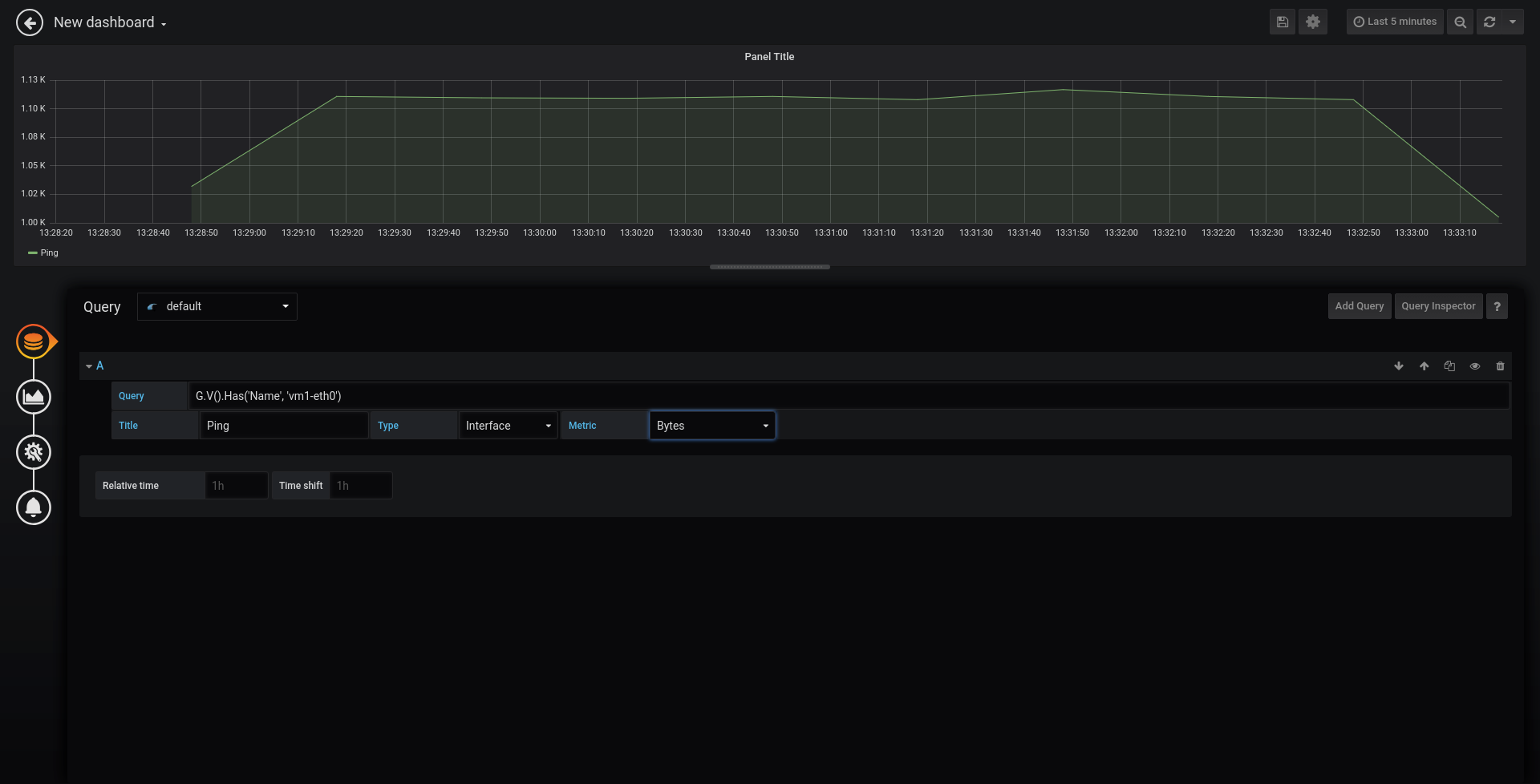 Here we used the Interface metrics but we could use the OpenvSwitch metrics as well, this is just a matter of select the Type.

So we used the Interfaces metrics to graph the traffic but as Skydive is also about capture we will graph using this feature in the following examples.

In order to get sFlow packet from OpenvSwitch we need to start a capture on the bridge. Skydive will select sFlow by default with default polling rate and sampling rate. This can be adapted using the advanced options.

The Gremlin expression in the query editor will be as following with the sFlow : 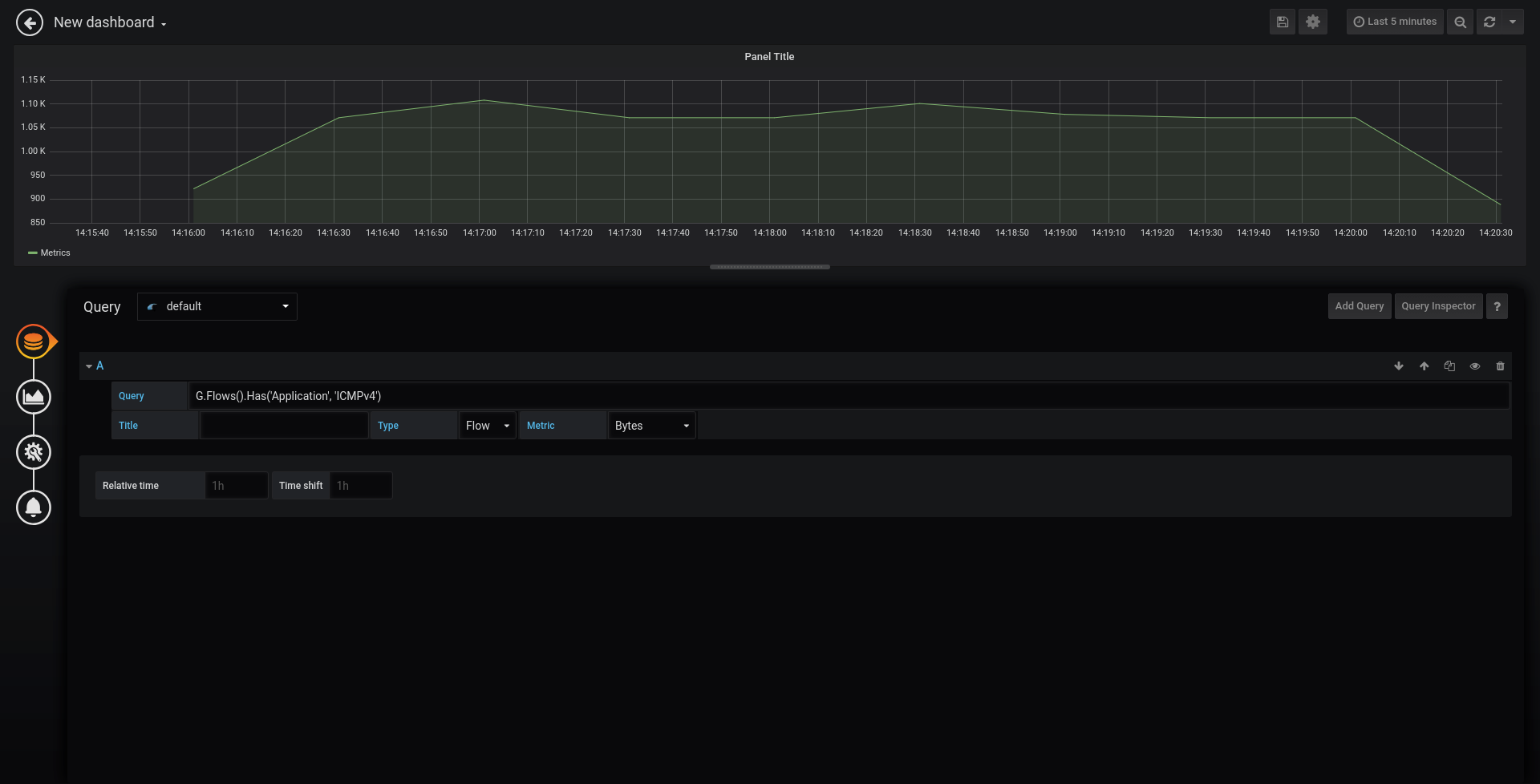 In order to get the RTT we start a capture on the eth0 interface of one network namespace.

Then it is just matter of selecting the RTT metric in the query editor. 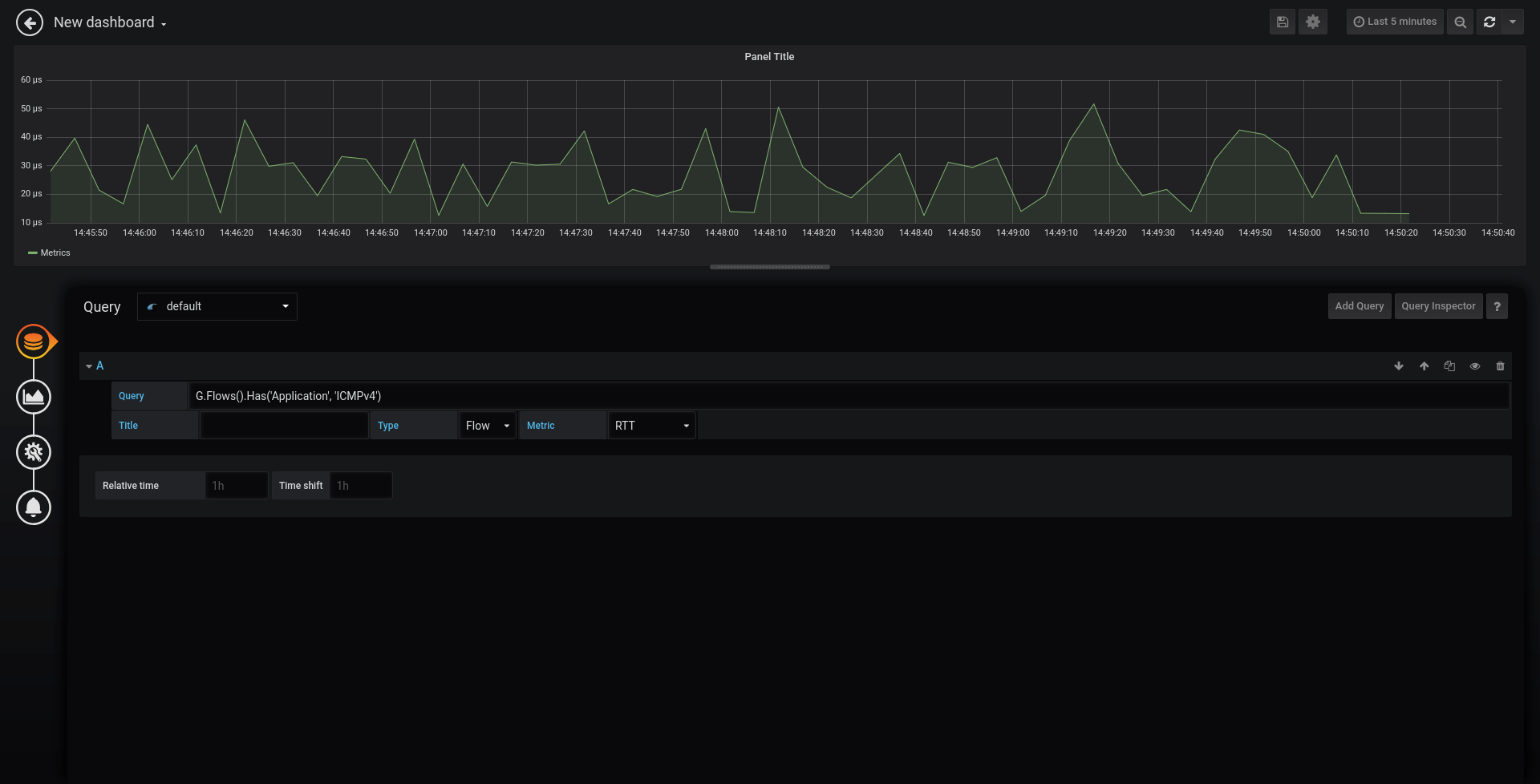 Let’s add a bit of latency…. 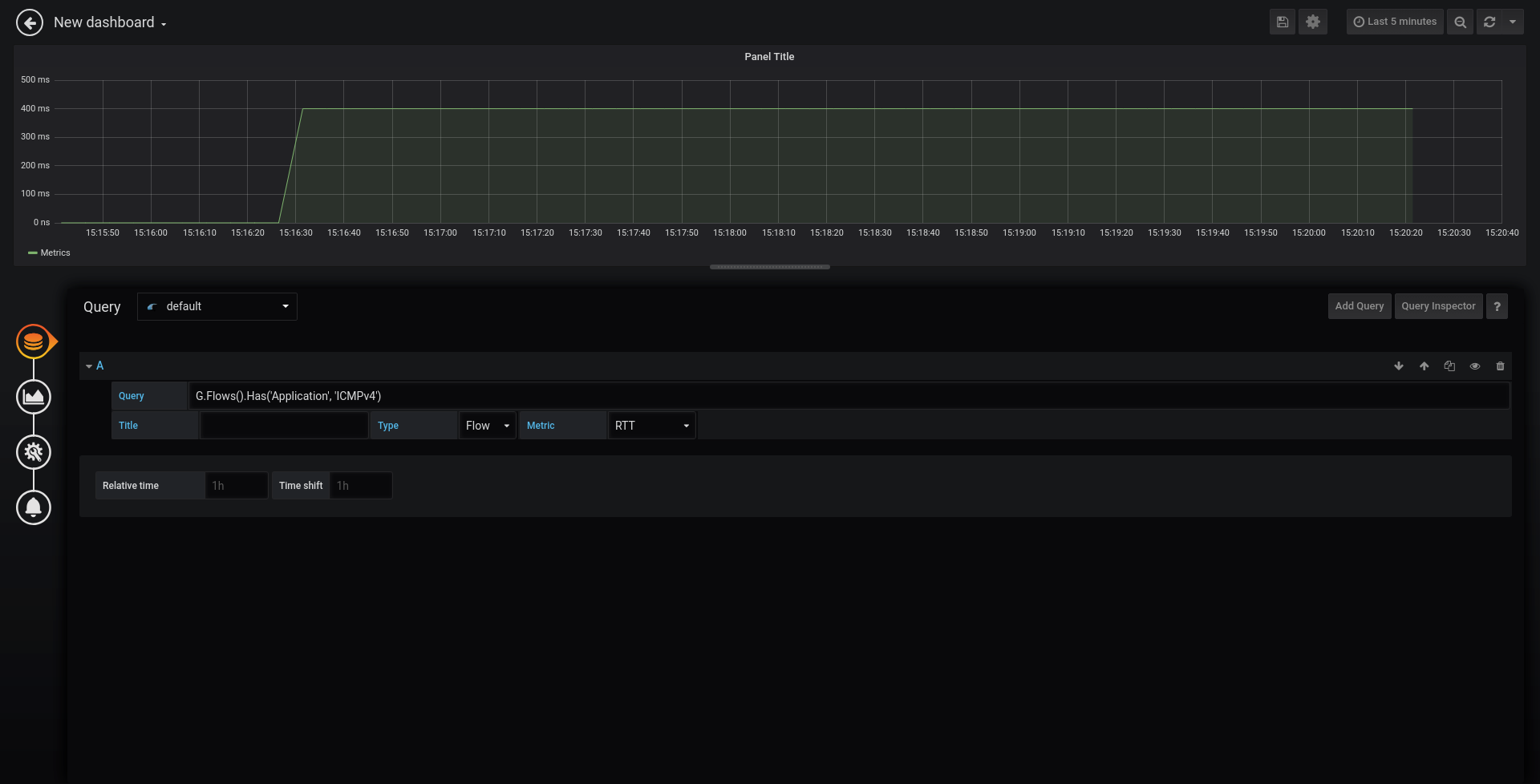