Skydive is an open source real-time network topology and protocol analyzer. It aims to provide a comprehensive way of understanding what is happening in the network’s infrastructure. To that end, Skydive collects data regarding the topology and the flows in the environment in which it is deployed and passes it to the user.

A flow is merely a connection (typically defined by a 5-tuple) between two endpoints that enables exchanging traffic over the internet. In a data center, the admin would typically aspire to collect information regarding such connections for various reasons, e.g., to ensure that certain security rules are being enforced, identify and debug network failures or even collect this data to perform further analysis and track specific protocols. 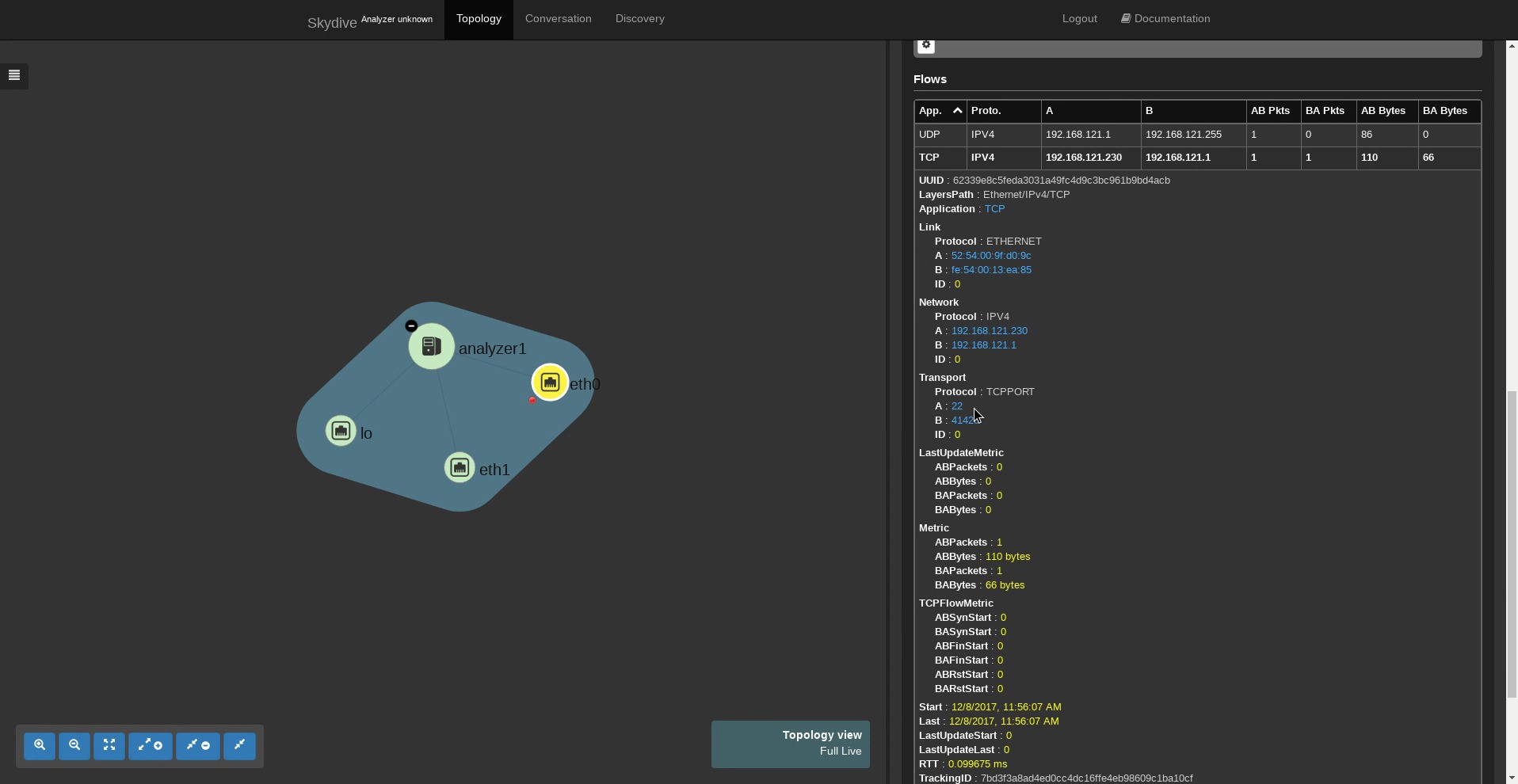 The flow probes that Skydive currently offers are:

Recently, our team has been experimenting with Skydive's eBPF probe, in an attempt to improve its performance and fix bugs in its internal implementation to enable Skydive's users to replace the currently used PCAP filter with eBPF, to obtain better performance and allow for a more fine-grained flow tracing.

Packet probes like PCAP and AFPACKET suffer from significant performance issues, for in order to extract the metadata from a particular packet, the latter must be copied to user-space. This entails a massive amount of unnecessary copies that slow down the system especially in cases where the packet's data is not needed, and we merely need the metadata to provide statistics and analysis for a given system, which is the typical case for Skydive's users.

The Magic of eBPF

To address the above problem, we utilize a powerful tool that the Linux kernel provides – eBPF. eBPF (https://lwn.net/Articles/740157/) is a mechanism that allows programmers to dynamically write code and run it as part of the kernel to be triggered upon certain events, that in our case are new packets that are received at the kernel.

With the help of this powerful tool, we were able to write a custom packet probe that operates as follows:

Using the above algorithm, we reduce the number of unnecessary copies by millions, especially when the number of concurrent flows in the system is low, and the intercepted packets belong to a meager number of connections. The system now only copies the flow structure from the kernel and discards all the packets that belong to it since they have already been processed inside the kernel.

By doing so, the new bottleneck becomes the number of concurrent flows, rather than the number of packets per second. Therefore, to ensure the performance boost, we need to set the relevant parameters appropriately, and in this case, there are two key parameters:

Setting the interval to be too short will result in a large number of copies and system calls that slow down the system, while a long interval will prevent the flow table from accepting new flows, for it will reach its maximum size and discard new incoming flows.

The flow table size is as crucial since it dictates the rate at which it should be flushed to the user-space. A large table will also exhaust the kernel memory.

Nowadays, it seems that a typical server (HTTP) serves, on average, around 50K requests per second. Therefore, we set the table size to 500K entries and the scan interval to 10 seconds, allowing us to handle 500K connections every 10 seconds, or equivalently, 50K connections/second. It is worth mentioning that Skydive exposes these two variables as configurable parameters – flow.max_entries and agent.flow.ebpf.kernel_scan_interval - And allows the users to change them as they see fit. However, we recommend that they remain unchanged (these are the default parameters and will be passed to the probes upon starting the capture unless the user specifies otherwise) since they are highly compliant with the demands from a real server and have proven to yield the best results in the benchmarking tests that we performed.

As mentioned above, the main challenge that the novel eBPF approach faces is the number of concurrent connections. In fact, it is almost agnostic to the rate at which new packets arrive, as opposed to other packet probes such as PCAP, AFPACKET, etc…

Hence, our test gradually increments the number of flows to detect the system's breaking point. The number of parallel connections ranges from 1 to 1M.

The numeric results are depicted in the graph below: 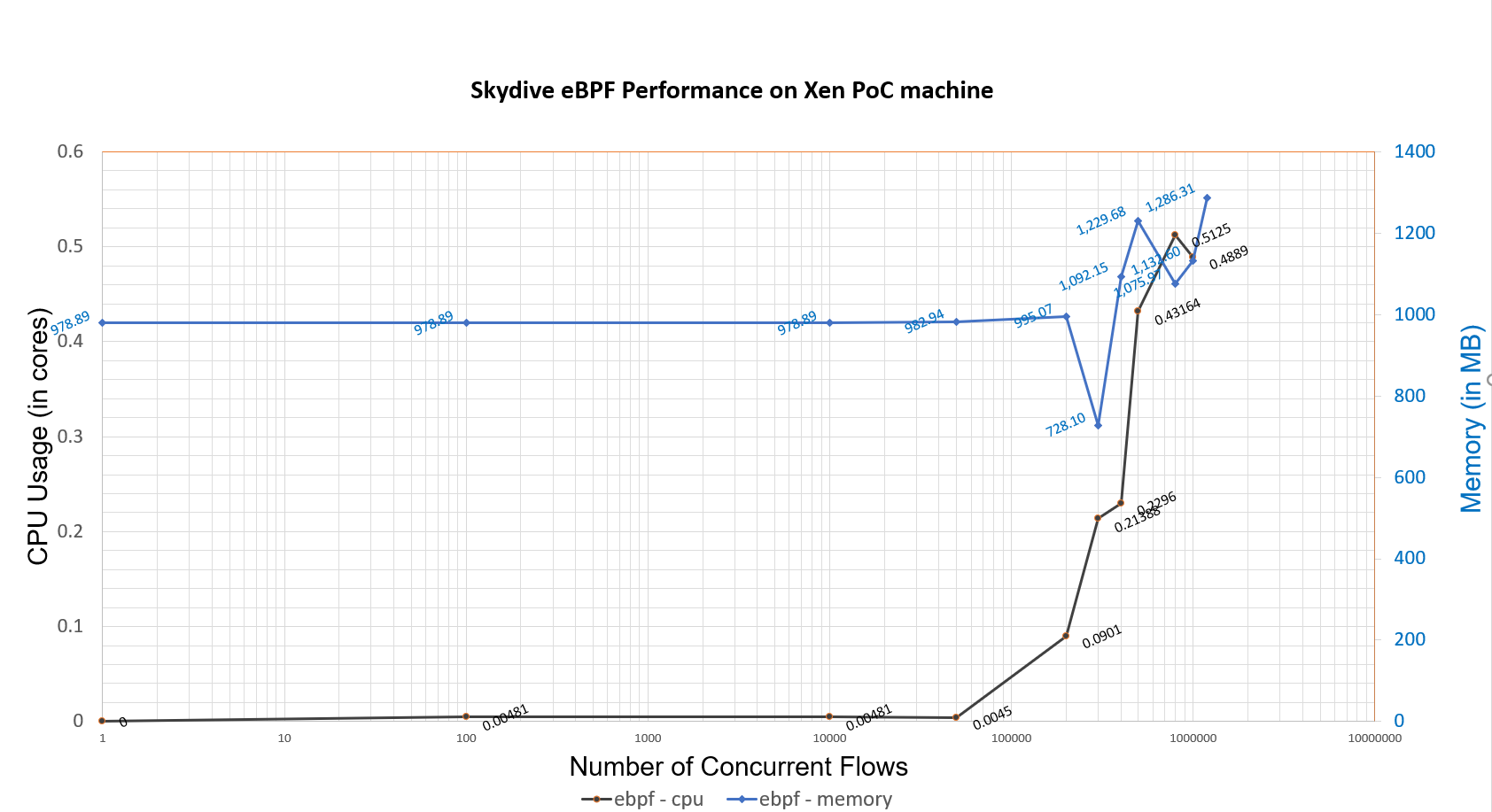 The graph below compares the CPU usage of the eBPF probe to that of PCAP:

However, in order to make it work with the eBPF probe and not the default PCAP, the command line would need to be extended as follows: