We use the term pipeline to describe the sequence of operations performed on the data: classify, filter, transform, encode, store.

You can either download a statically linked version of Skydive or you can build it on your own.

To download a pre-compiled statically linked version of Skydive, run the following command.

To build your own version of Skydive, follow the instructions on Build Documentation to install prerequisites and prepare your machine to build the Skydive code. Enter the Skydive root directory and build the code.

The skydive binary is created in $GOPATH/bin/skydive.

Alternatively, run a Skydive analyzer on one host and a Skydive agent on each of your hosts.

Be sure to set the field analyzers in the skydive.yml to point to the analyzer.

The secadvisor.yml is used as a parameter when running secadvisor from the command line.

The default secadvisor.yml has the following fields:

Description of fields in secadvisor.yml file

Entries that begin with ‘#’ are comments and are ignored. Be sure to include/exclude the appropriate configuration parameters.

Set endpoint to the object store endpoint URL, e.g. https://s3.us.cloud-object-storage.appdomain.cloud. Set the credentials used for authenticating to the object store service. You can either use AWS-style HMAC keys by setting access_key and secret_key, or use IBM IAM OAuth by setting api_key. When using IBM IAM Oauth (when setting api_key), the default IBM IAM authentication endpoint will be used: https://iam.ng.bluemix.net/oidc/token, if none is specified. You can customize this endpoint by setting a different iam_endpoint to an alternative URL string.

Set bucket to the name of the destination bucket where flows will be dumped. If your object store service requires a region specification, set region appropriately. This setting is not necessary when using IBM COS.

The subnets specified in cluster_net_masks are used to determine whether a flow is internal, ingress, or egress. Enter in the list all of the subnets that you consider to be inside your domain of security.

Be sure to set the parameters max_flow_array_size, etc, to reasonable values.

You can either use AWS-style HMAC keys by setting access_key and secret_key, or use IBM IAM OAuth by setting api_key.

In IBM Cloud, Create an Object Store resource. In the Object Store, create a bucket to hold the Skydive flow information. For simple testing, you can choose Single Site resiliency. Look under Bucket Configuration to see the Public endpoint (url) where the bucket is accessed. This endpoint information needs to go into the secadvisor.yml endpoint field. Go to the Service Credentials panel and create a new credential. Click on View Credential to get the details of the credential. The apikey needs to go into the secadvisor.yml api_key field. In the secadvisor.yml file, uncomment the iam_endpoint field and set it to https://iam.cloud.ibm.com/identity/token.

For running tests on a local machine, it is possible to set up a local Minio object store.

For details, see the instructions in Flow Exporter Overview.

Build and run the pipeline in the secadvisor directory: skydive-flow-exporter/secadvisor

The binary is created in the directory: go/bin

Note that it is possible to run several instances of the Security Advisor at the same time, each one with a different configuration file. This is useful to capture different flows for different purposes and to perform different filtering (e.g. based on specified cluster_net_masks and filter parameters).

Via the Skydive WebUI setup captures and generate traffic which should result in the secadvisor pipeline sending flows to the ObjectStore.

To connect to the GUI, open a web browser to the address of the Skydive analyzer at port 8082. If running the browser on the same machine as the analyzer, then connect to localhost:8082. You should see the topology of your network, perhaps something like the following image. 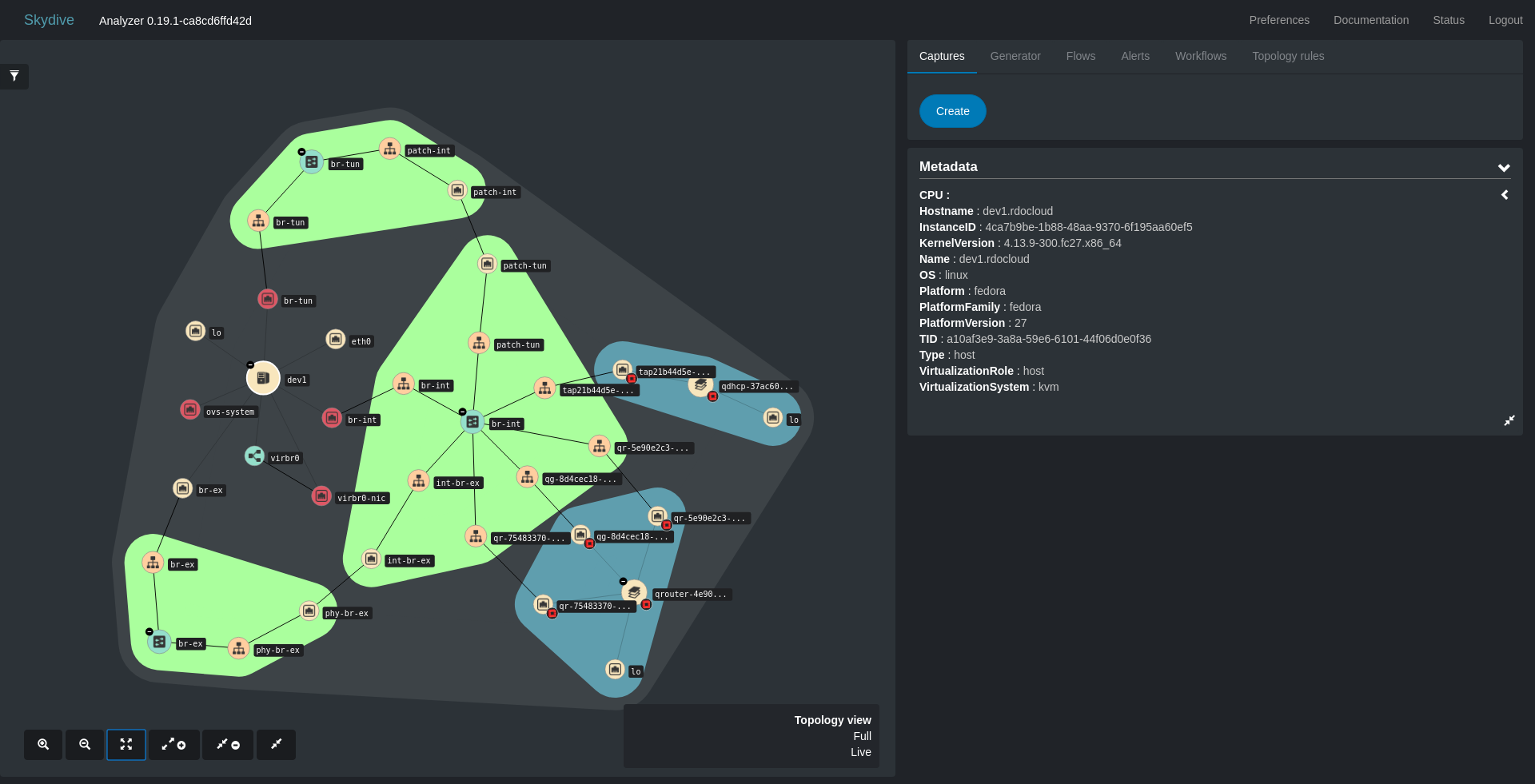 Make sure you are on the Captures view and press on Create.

Alternatively, you can start the capture of flows from the command line with a commond like the following:

The command specifies to capture all flows that match the gremlin expression - in this case, all devices that have name ‘eth0’.

Generate some network traffic on the interfaces you specified to capture. For example, run some iperf traffic between entities and capture the flow via the Skydive GUI.

To install iperf3 (on ubuntu/debian):

Either on the same machine or on another machine, run the iperf client:

It is also possible to generate network traffic using the inject feature of Skydive, either from the command line or through the Skydive GUI. Go the Generator page and specify the source and destination nodes between which to generate the network traffic, as well as the characterization of the flow you want to generate.

Objects are created in the Object Store only if there is flow information to be saved.

For each flow we have the following fields and types, all collected in JSON encoding format.

UUID - unique ID of the flow.

Version - version of the Security Advisor pipeline being run.

Status - status of the flow; may be STARTED, ENDED, or UPDATED.

FinishType - indicates how a flow ended; may be SYN_FIN, SYN_RST, Timeout, OVERFLOW, or empty if flow still on-going.

LastUpdateMetric - represents delta relative information only for this latest update from source (A) to destination (B). It contains the following fields pertaining to the most recent update interval:

Metric - represents cumulative information for this flow from source (A) to destination (B).

Start - time when this flow was first detected.

Last - time when last packet for this flow was detected.

UpdateCount - number of updates in this report.

Extend - miscellaneous fields defined by the user, as described in the next section.

We added to the secadvisor pipeline the capability to extend the data output by specifying gremlin expressions with substitution in the yml file to generate additional fields in the output flow information. The basic syntax in the yml file looks like the following:

The result is that the value of Network.A (in the above example: 169.45.67.210) is inserted in the gremlin expression, the gremlin expression is then evaluated (or obtained from a cache), and the resulting value (the name of the host holding the network interface) is then placed in the field AA_Name under the Extend field of the flow information.

The substitution string refers to fields that already exist in the data provided by the particular transform. If needed, be sure to put quotes around the substitution results. It is recommended to use only single quotes in the gremlin expression.

It is possible to run multiple pipelines simultaneously. Prepare a separate

If the secadvisor log shows a connection refused error, verify that the proper address of the Skydive analyzer is specified under analyzers.

If the secadvisor log shows a credentials error, verify that the credential fields (<access_key, secret_key> for minio, and <api_key, iam_endpoint> for IBM COS) are properly set in the secadvisor.yml file.

If the secadvisor log shows an overflow and states that flows were discarded, check that max_flow_array_size is defined to some reasonable positive number - at least the number of flows you expect to capture.